Filipinas in the U.S. March on May Day for Protection and Dignity for Immigrants and Workers

Filipinas in the U.S. March on May Day for Protection and Dignity for Immigrants and Workers 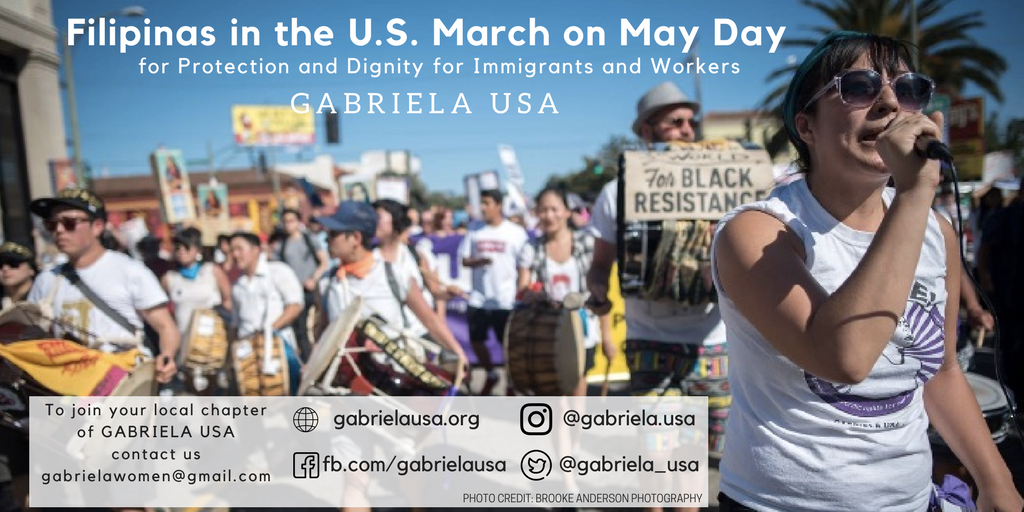 On May 1, 2017, GABRIELA USA chapters in Seattle, Portland, San Francisco, Oakland, Los Angeles, Washington D.C., New Jersey and New York City mobilized alongside thousands of immigrants and workers to demand safety, dignity and access to basic rights under an anti-immigrant and anti-worker Trump administration. In light of increasing criminalization of immigrants, through the implementation of Trump’s fascist policies of immigration bans and building border walls, GABRIELA USA insists on upholding humane legislation such as sanctuary laws for undocumented immigrants and protection for immigrants in detention and deportation proceedings. At the same time, the alliance of progressive Filipino women’s organizations also upholds the rights of workers in this country and globally–for a living wage, dignity and respect in the workplace, and access to decent jobs.

Filipinas, both immigrants and children of immigrants, marched side by side with other immigrant communities to underscore the significant contributions of immigrants to the U.S. economy today and historically. With placards, banners, and speeches about modern day colonialism and imperialism, members connect the violence of U.S. war and occupation abroad to the trends of migration to the U.S. Trump is calling for a $58 billion increase for the Defense Department dedicating half to military spending, while cutting his federal budget on housing, education, healthcare, women’s reproductive health, and organizations that provide support for domestic violence survivors. Trump and his administration is exposes themselves in not prioritizing low-income women of color, immigrant women workers, trans and gender nonconforming people and our children who will bear the brunt of the harm of these policies. 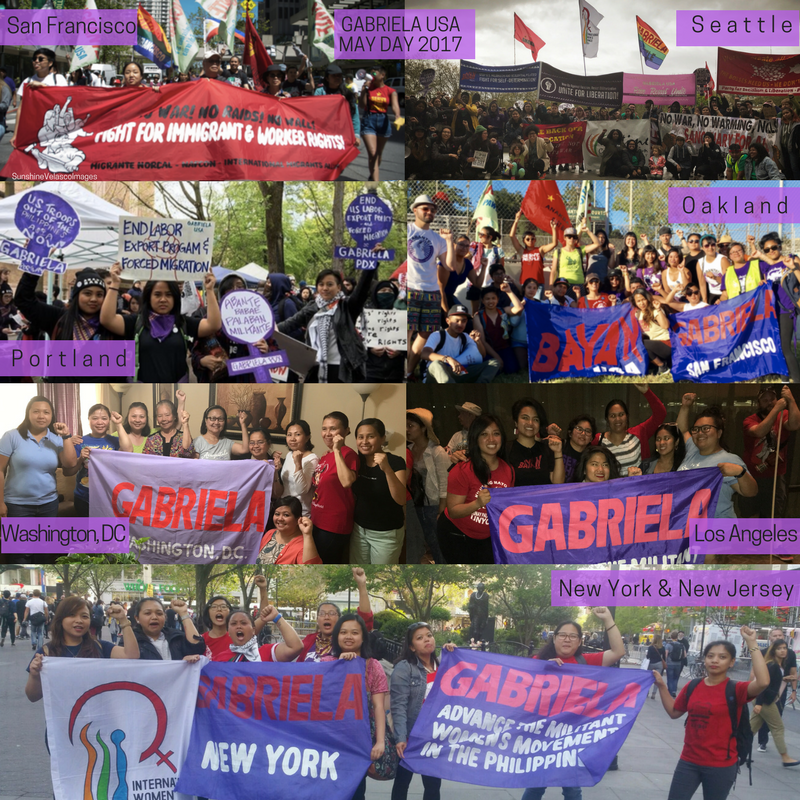 Filipinos make up one of the largest Asian American immigrant communities in the U.S.–they also make up a formidable number of migrant workers employed in essential industries like healthcare, domestic work, construction, and education. Filipino women are also victims of human trafficking in these industries. GABRIELA women demand and say no to war because women are the victims of crimes promoted by the U.S. wars abroad and at home including murder, rape, harassment and other sexual abuses, and human trafficking. GABRIELA USA has been at the forefront of demanding justice for Filipino immigrants who have been exploited without recourse from the U.S. and Philippine governments.

Representing Filipinos who are working in low-wage industries and also professional sectors, GABRIELA USA members marched for dignified and respectable working conditions. Nationally, members are waging and supporting campaigns on livable wages, wage theft, and an end to human trafficking and forced migration. GABRIELA USA calls our community, families, and our allies to RISE, RESIST, and UNITE: RISE against fascism, RESIST militarization, and UNITE for self-determination and liberation for all oppressed peoples. With the demand to protect and preserve the dignity of immigrants and workers, mass organizations remain committed to organizing in our communities and among the ranks of working women in order to advance the struggles of workers and all the oppressed. On May Day and everyday, GABRIELA USA stands with immigrant communities and workers whose labor, skills, and contributions advance the U.S. economy, allowing society to run and function daily.

GABRIELA USA is a grassroots-based alliance of progressive Filipino women’s organizations in the United States seeking to wage a struggle for the liberation of all oppressed Filipino women and the rest of our people.
While we vigorously campaign on women-specific issues such as women’s rights, gender discrimination, violence against women and women’s health and reproductive rights, GABRIELA USA also addresses national and international economic and political issues that affects Filipino women.
GABRIELA USA is an overseas chapter of GABRIELA Philippines, and is a member organization of BAYAN USA and the International Women’s Alliance.
GABRIELAUSA.org
Facebook  |  Twitter  |  Instagram