Philippine President Benigno “Noynoy” Aquino is set to deliver his State of the Nation Address (SONA) on July 28, 2014, which we can expect to be several hours worth of the same broken promises and excuses Aquino has been promoting for the past three years of his sordid administration. Mired in recent controversies of corruption via the presidential Disbursement Acceleration Program (DAP), brash signing of the Enhanced Defence Cooperation Agreement (EDCA), continued human rights violations, and his inadequate response to Typhoon Haiyan, Filipino-American women are fed up with a negligent president and are joining mass protests to call for Aquino’s impeachment from office.

Eight months after Typhoon Haiyan ravaged the Philippines, the Aquino administration has failed to respond to the basic needs of typhoon survivors. In March, during a dialogue with the Department of Social Welfare and Development (DSWD), representatives of Typhoon Haiyan survivors, majority of whom are women and children, called for P40,000 (roughly USD $925) in immediate relief stipends for families. This request was denied by DSWD due to a supposed lack of funding, which raises concerns on how the national budget and global aid has been allocated and spent.

Mired in recent controversies of corruption via the presidential Disbursement Acceleration Program (DAP), brash signing of the Enhanced Defence Cooperation Agreement (EDCA), continued human rights violations, and his inadequate response to Typhoon Haiyan, Filipino-American women are fed up with a negligent president and are joining mass protests to call for Aquino’s impeachment from office.

“When the government shrug their shoulders about relief and basic needs of the Filipino people, the whole country suffers. It is unacceptable that crooked politicians claim a lack of funding and turn around to spend millions of pesos on luxurious and unnecessary expenses,” says Valerie Francisco, National Chairperson of GABRIELA USA.

To this end, proof of Aquino’s contradictions with his “straight and narrow” way or matuwid na daan has come to the fore as the Supreme Court recently ruled that the presidential pork barrel, the Discretionary Acceleration Program (DAP), a lump sum of discretionary funds under the total control of the president, as unconstitutional. The president claimed that DAP was supposed to be a stimulus for the Philippine economy when expenses such as the P800 million of his DAP funds for Malacañang renovation do not have clear consequences for the overall national economy and still leaves Filipinos in need out to dry.

The signing of EDCA, which allows U.S. military presence in the Philippines, is also a clear sign of Aquino’s disregard for the well-being of women and children. “It is widely known that prostitution, sex trafficking, and human rights violations run rampant in areas surrounding military bases, and we can only expect these to increase with the signing of EDCA,” says Pia Cortez, Chairperson of GABRIELA San Francisco. It is clear that the Aquino administration continues to prioritize US interests over the well-being of his own people.

Aquino’s lack of commitment to the welfare of Filipinos extends to migrant citizens in the U.S. The plight of more than 200 trafficked Filipino teachers still hang in the balance, as the hunt for their trafficker, Isidro Rodriguez, continues after being released from prison in the Philippines. “Aquino and the Department of Justice has failed to protect its citizens from predatory human traffickers, and continues to fumble in its handling of a clear human trafficking case impacting hundreds of people! In the mean time, survivors are left to fend for ourselves without any support from the government agencies that were so eager to take our money and migrate us out of the country!” claims Fen Ecleo, Co-chairperson of GABRIELA Washington DC and survivor of human trafficking.

With these outstanding abuses to Filipino in the Philippines and worldwide, there is no doubt that Aquino is filled with deception and defensive strategies to keep him and his elite cronies protected. Joining a growing clamor of Filipinos calling for accountability from the president, member organizations of GABRIELA USA will be protesting Aquino’s SONA outside of Philippine embassies across the U.S. carrying peach ribbons, calling for the imPEACHment of Aquino. 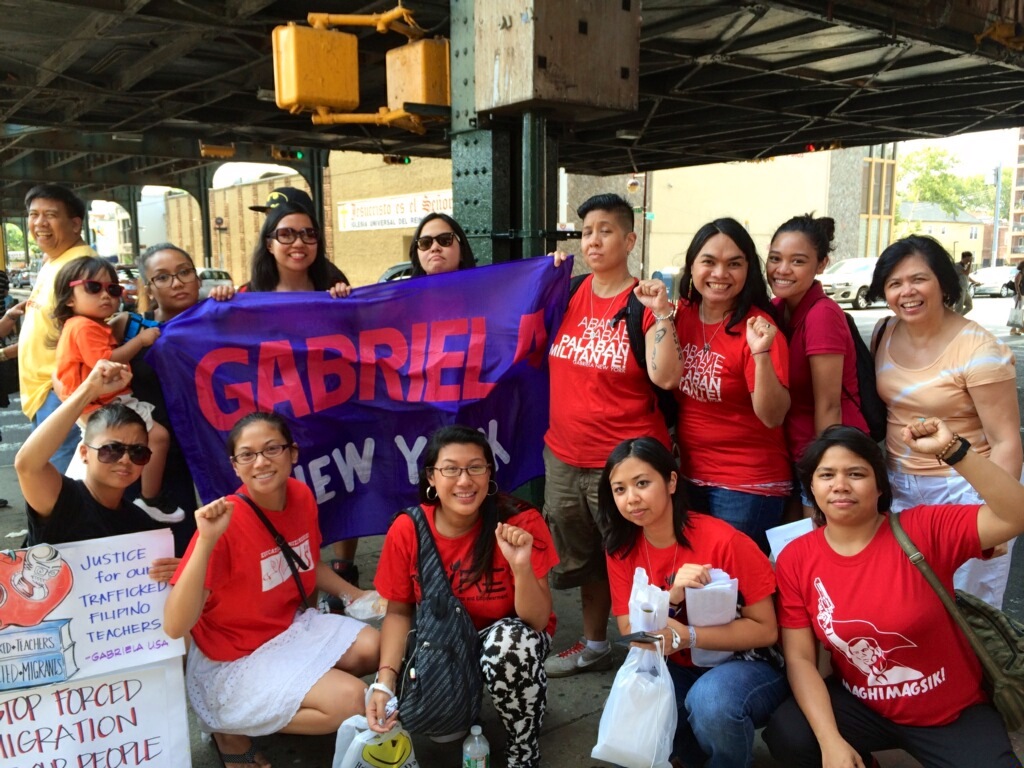